Sought-after, coveted, highly regarded, pricey, idyllic, best in Finland, expensive. These are some words Oulu inhabitants use to describe the beloved Karjasilta neighborhood, where the demand for apartments has surpassed the supply years ago. Lehto’s new 7-storey project As. Oy Oulun Kapiteeli brings long-awaited options for those looking for a reasonably priced studio or one-bedroom apartment in Karjasilta. The development will be situated just two kilometres from the Rotuaari pedestrian centre, connected to the city centre with excellent public transport and quick bicycle routes. An unmissable listing for home buyers and investors alike!

Smart apartment investors will do well not to dismiss the opportunity As. Oy Oulun Kapiteeli presents. Reasonably prices studios and one-bedroom apartments in Karjasilta are very hard to come by. Tenants are pulled in by the ease of access to the centre, the good neighborhood services, the reputation of the area plus the proximity to academic institutions and jobs. And if the plans for the Oulu University’s new Raksila Campus go through, its proximity will further add to the demand for small rental apartments in Karjasilta. 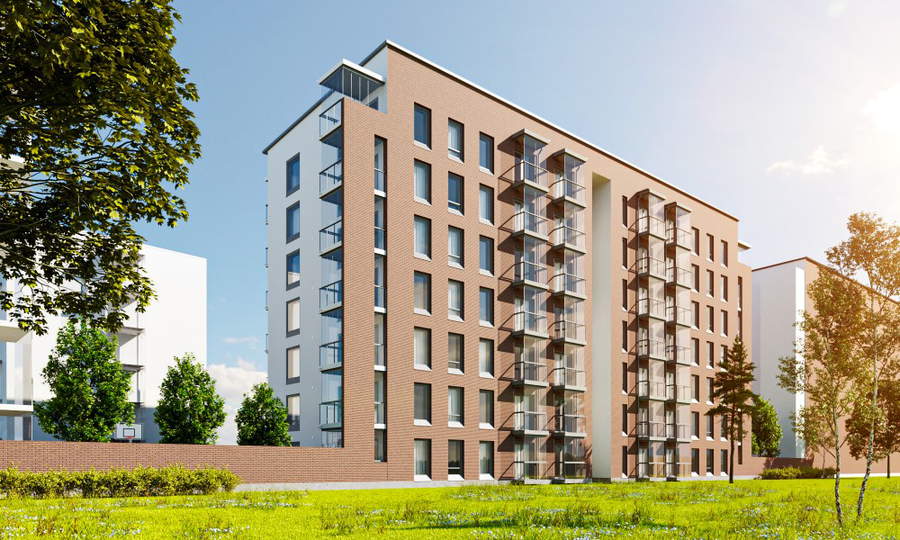 Did you know that Karjasilta was voted the best neighborhood in Finland not that long ago? Its unique atmosphere and characteristic post-war wooden houses won it the title, and the neighborhood has now become so popular, Oulu folks are literally queuing to live there. Karjasilta is home to people of all ages and occupations from students to medical doctors and everything in between. Maybe you too, soon? 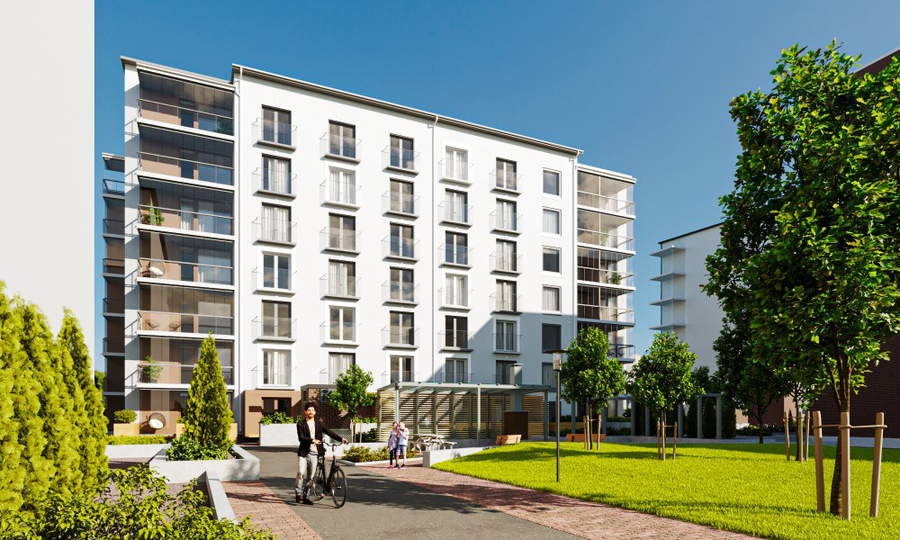 As. Oy Oulun Kapiteeli will be built on the lot of the old Kaleva printing house, near the main businesses of Karjasilta. Oulu centre is easily reachable on foot (25 mins), by bike (8 mins), by bus (13 mins) or by car (7 mins). The development is within easy reach from the bus and train station Matkakeskus (1,8 km), the Oulu University Hospital OYS (2,4 km) and the Oulu Conservatory (850 m). Limingantulli (1 km) and the beautiful recreation area by the Lintulampi pond (800 m) are also nearby.

Around As. Oy Oulun Kapiteeli you can enjoy excellent neighborhood services that make living here a real breeze. Within a half-a kilometre radius you will find 3 grocery shops, a school and a day care centre, for example. A library (1 km), a fitness centre (1 km), a Prisma hypermarket (1,2 km) and the Oulu Music Centre (650 m) are within an easy walking distance. There are also numerous large shops offering home décor items for those building a new nest of their own. 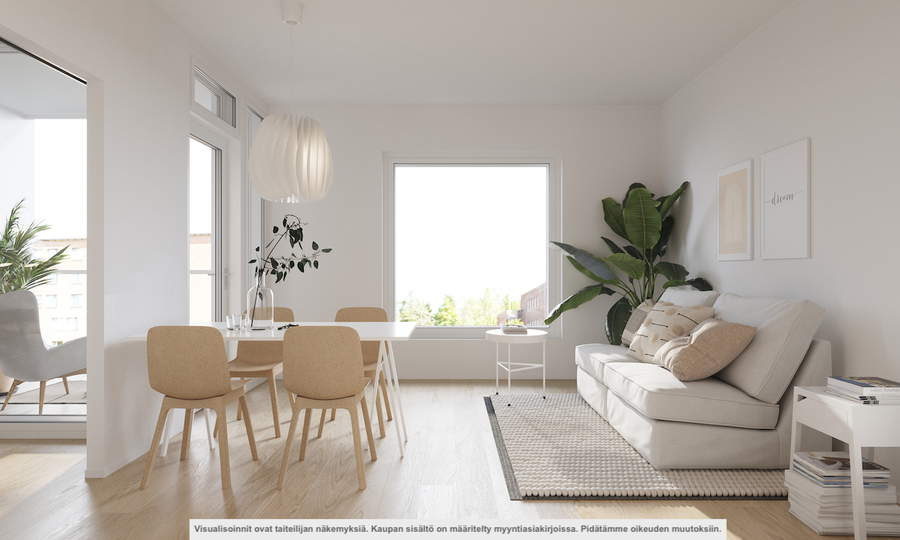 As. Oy Oulun Kapiteeli offers you quality living in a decidedly modern setting. The Scandinavian architecture of this 7-storey development is fresh and cool. The apartment design is highly functional and all the homes are filled with plenty of natural light. The stylish materials and the quality of the finish ensure a lovely living experience. Each unit comes with integrated kitchen appliances and a black stone composite kitchen sink, controllable water-circulating underfloor heating and electric bathroom heating, quality wardrobes and cupboards plus a stylish wall fitted toilet. Inhabitants can also purchase a parking space in the convenient underground parking garage. 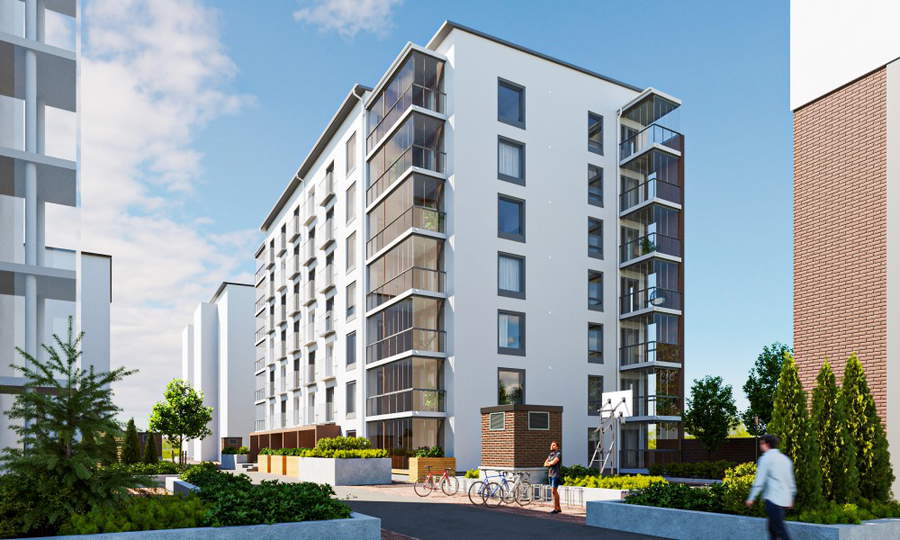 An excellent setting for outdoor activities

As. Oy Oulun Kapiteeli is a good starting point for refreshing morning or evening walks or jogs. The quaint wooden houses, the Hiirenoja stream and the jogging and skiing trails in the Lintulampi park and around the Heinäpää sports centre offer a nice setting to take care of oneself while enjoying the best of city nature. The park surrounding Lintulampi also has bicycling trails and a campfire site – ideal surroundings to eliminate any stress and enjoy some relaxation in nature true Finnish style.

Music and culture lovers making a home in As. Oy Oulun Kapiteeli will be well served by the proximity to he Oulu Music Centre (650 m). This popular venue hosts pop concerts, musicals, ballet performances, stand up and of course, the concerts of the Oulu Symphony Orchestra. The bands performing at Club Teatria (1,5 km) pull in crowds from hours away. One kilometre from home you can try your sense of rhythm at the Oulu Dance Adacemy, bringing together dance enthusiasts of all ages.

All the Kapiteeli apartments are sleek and stylish, bright and well thought-out. The quality of the materials, the fittings and furnishings and the home appliances stands out in comparison to what else is on offer.

One of the main sales points of As. Oy Oulun Kapiteeli is its excellent location, just two kilometres from the centre of the city. It’s an easy bike ride (8 mins) or a bus ride (13 mins) to the Central Marketplace – and yet the immediate surroundings of your home will be calm and pleasant, even idyllic. Quite a catchy combo, right?

Although the city centre is so easy to reach, there’s usually no need to go even that far for everyday shopping and services. Less than 500 metres away from As. Oy Oulun Kapiteeli you’ll find three grocery shops, a day care centre and a school. Go another 500 metres out and you’ll get to a fitness centre, a library, a hypermarket, a large sports shop and a selection of large home décor shops at your service.

Oulu residents regard Karjasilta in high esteem for its beauty and its calm and pleasant atmosphere. This high regard manifests itself in constantly rising apartment prices, which are getting out of the reach of everyday apartment buyers. This is where As. Oy Oulun Kapiteeli comes in, combining the coveted location and the high quality of the construction with a surprisingly reasonable price tag.

At Lehto, a reasonable price tag will never mean lowering your standards for stylish architecture or your expectations for quality living. Each apartment at As. Oy Oulun Kapiteeli is the culmination of a long product development process within both architecture and design. All the Kapiteeli apartments are sleek and stylish, bright and well thought-out. The quality of the materials, the fittings and furnishings and the home appliances stands out in comparison to what else is on offer.

The surroundings of As. Oy Oulun Kapiteeli offer inspiration for the lovers of art, entertainment, sports and nature alike. The Music Centre nearby is the beating heart of Oulu cultural sphere, tempting you with excursions into both classical and pop music. Other popular activities nearby include dance, live music gigs, gym, nature walks, jogging, cycling and cross-country skiing.

Finnish university cities like Oulu offer excellent investment choices, especially because of their lively rental markets. As. Oy Oulun Kapiteeli boasts quality studios and 1-bedroom apartments in a central and growing neighbourhood, with services, jobs, educational institutions and great connections to the centre. These basic building blocks of a good apartment investment combined with Lehto’s quick process, guaranteed completion dates and a meticulous approach to construction and finish make As. Oy Oulun Kapiteeli an unique opportunity for any savvy apartment investor.

In these documents you will find everything you need to know about the Development. You can load a document by clicking its link.