LOFT living near the city centre and the Hupisaaret Islands – affordably

Across from Åström Park, about half a kilometre from the pedestrian streets of the city centre, stands Oulu’s charming old harness factory.

The ceiling height of these extraordinary city homes is tremendous, and most of the homes have a delightful little loft. Large paned windows reminiscent of the building’s history also contribute to the homes’ unique look. The location of Valjastehdas is unbeatable: within reach are the paths and streams of the Hupisaaret Islands and all the amenities of the city centre.

The Åström Brothers’ harness factories were originally built in a milieu of wooden buildings, next door to the eponymous park, as part of the Åströms’ factory area in Myllytulli. The centre of Oulu has subsequently grown and the city’s population has multiplied, but the harness factory still stands between the park area and the new centre – as if bordering on two eras, a part of both. 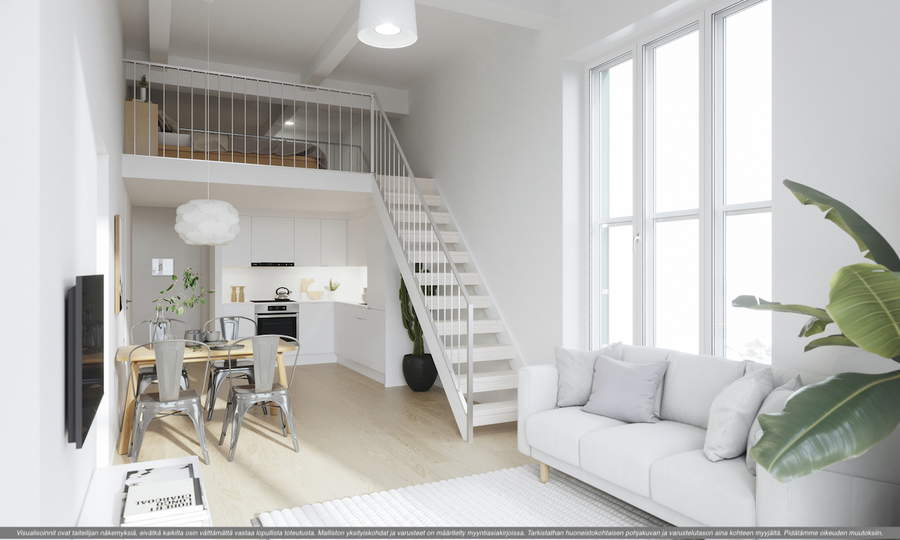 The very first inhabitants of Valjastehdas will enjoy a smooth daily routine, since all the amenities are within easy walking distance. A mere 450 metres away, a K-Market can cater to smaller shopping trips, while the Valkea shopping centre (550m) is there for the bigger ones. The neighbouring city block is home to the Myllytulli school and Oulu’s international school. On the corner of the park opposite, Tuba Food & Lounge welcomes you to an atmospheric restaurant block, where Tuba, Rauhala and Voimala 1889 offer exceptionally good food, events and cultural experiences. In addition, all of the workplaces, shopping and entertainment facilities of downtown Oulu as well as municipal amenities are within walking distance. 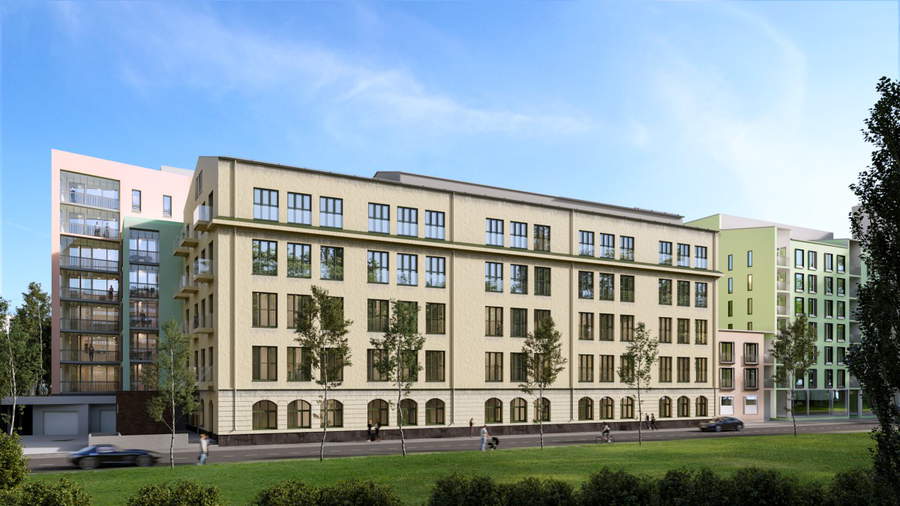 The Åstrom Brothers’ over 120 year-old factory building is getting a new life that is worthy of it, since it is being renovated for residential use in such a way that its historic facade will remain part of the streetscape. All but two of the largest apartments in Valjastehdas have their own space-adding loft – quite a find with these postal codes. The single-room (26 m2 – 41.5 m2) and two-room apartments (39 m2 – 53 m2) are particularly spacious and are excellently suited to home ownership. An abundance of light pours in through the former factory building’s large paned windows. Many apartments have balconies, and the beautiful park scenery can be enjoyed from window seats on the park-facing windows. Several apartments have the added luxury of their own sauna. Residents of Valjastehdas also have access to the building’s communal sauna and apartment-specific storage space. The courtyard also has a play area for the little ones. 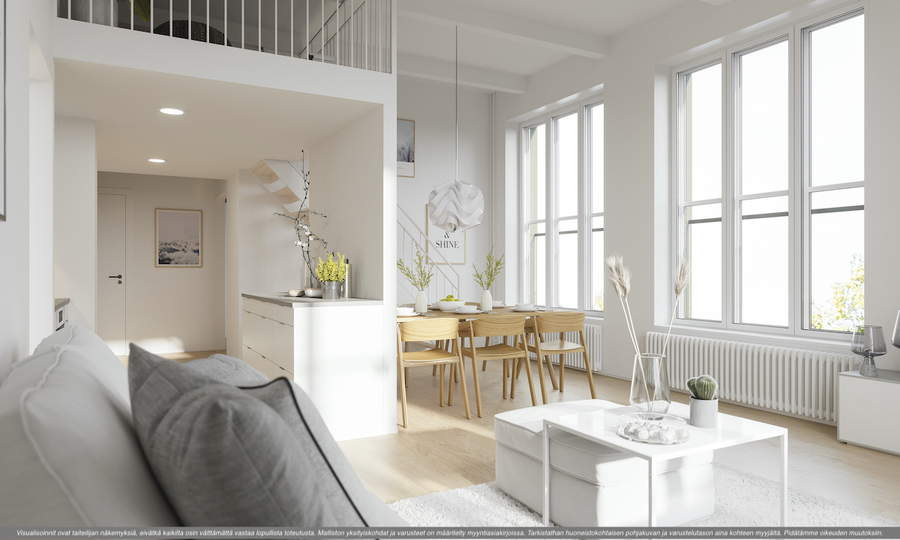 Excercise and Culture within walking distance

Valjastehdas makes a splendid home base for both exercise and culture enthusiasts – with the Hupisaaret Islands and the city centre around the corner, it’s easy to think of things to do for every day of the week. The verdant riverine scenery is the perfect setting for morning or evening strolls. On the weekend, the city centre’s cultural activities beckon: gigs, concerts, art exhibitions and events. The public swimming pool, city theatre, library and sports hall are all within a 1-1.5 km radius, and an art museum is even closer (350 m). Art and cultural festivals, exhibitions, clubs, workshops and shows are organized under the roof of the Valve Cultural Centre (600 m). Families with children will love the Hupisaaret central playground (400 m) and the nearby Tietomaa Science Centre (500 m).

The Åström Brothers’ harness factories were originally built in a milieu of wooden buildings, next door to the eponymous park, as part of the Åströms’ factory area in Myllytulli. The centre of Oulu has subsequently grown and the city’s population has multiplied, but the harness factory still stands between the park area and the new centre – as if bordering on two eras, a part of both.

Particularly reminiscent of times gone by is the ceiling height of these homes, thanks to which many apartments even have a loft for added spaciousness. Standing on the bench, the paned windows act almost like a French balcony, since a frameless glass railing is installed outside the windows. The bench is also great for sitting down and hanging out with friends and family.

A historic development near the city centre

Oulun Valjastehdas is a rare treat for all who dream of having their home in a historic building, just outside the centre of Oulu. And this isn’t just any old building, it’s a truly authentic factory building, now awaiting its first residents!

Stimulation and easy living for families with children

The large homes of Oulun Valjastehdas can also be a superb base of operations for highly active families. The school simply couldn’t be closer, nor could the park! A daycare is also just a few minutes’ walk away. Thanks to bus connections and routes for walking and cycling, older children can easily travel to their extracurricular activities independently. For the little ones, there is a playground in the courtyard. When you have more time on your hands, you can make a trip to the Hupisaaret central park 400 metres away.

Daily life at Valjastehdas lacks nothing, since all kinds of recreational facilities and amenities are within walking distance. The neighbouring block has a primary school, and a store and daycare are within a radius of about half a kilometre. About 500 metres away begin the pedestrian roads of the city centre. In addition to the Hupisaaret park, the sports hall and swimming pool can also be reached on foot or by bicycle. A rich cultural offering can be found at the restaurant block that begins at the corner of the park, where gigs and other events are organised – out in the courtyard in summer. Not to mention the tasty chow.

The Hupisaaret Islands on your doorstep

Oulun Valjastehdas is situated opposite the lovely Åström park, behind which extend the Hupisaaret park areas loved by all locals. Trout streams, white bridges and the soughing of old trees – all of this is just a few steps away from Valjastehdas!

We at Lehto are extremely proud of our concept, which enables us to offer high quality city homes at affordable prices even in places where residential prices are too often slipping out of buyers’ reach. Apart from being unique, Valjastehdas is also a development without a company loan, and so residents are not jointly liable for the company’s debts. The plot is an optional lease plot, which means that an apartment buyer can choose to purchase his own plot share, and thereby save on residential expenses.

In these documents you will find everything you need to know about the Development. You can load a document by clicking its link.